Carmen: show and tradition at Teatro Fígaro in Madrid

Since June 2014, Flamenco’s fans can enjoy an
exclusive performance produced by the Spanish ballet company ‘Ballet Flamenco
de Madrid’ with the show Carmen by
Bizet, at the theatre Teatro Fígaro in Madrid. It is an art exhibition created
by the director Luciano Ruíz in which the artist Verónica Santos gives life to
the popular character of Carmen under the artistic direction of the
choreographer Sara Lezana.

The story of the plot told us about the life of
this character: Carmen works in a tobacco factory is a cigar maker in Seville
by the beginning of the 19th century, when working as a cigar maker was pretty
common for local women in that period. With her strong, unpredictable, impulsive
and romantic, Carmen performs the picture of an intoxicating woman who has an
unavoidable power on men, and we see it on her affairs throughout this play. On
her leading role, her character stands out amongst the rest of the gipsy
workers in the factory, and she wins over Don José (Francisco Guerrero), a
soldier who falls hopelessly in love with her. However, Carmen’s love is as
fleeting as the stomp of their heels and the fullness of her dress while
dancing Flamenco, and she will soon forget the soldier just to come into the
arms of another man, a bullfighter called Escamillo. Many emotional
fluctuations who move up and down to the rhythm of the harmony and sensuality
of the Flamenco style from the ballet company ‘Ballet Flamenco de Madrid’ and
the work of the choreographer Sara Lezana. 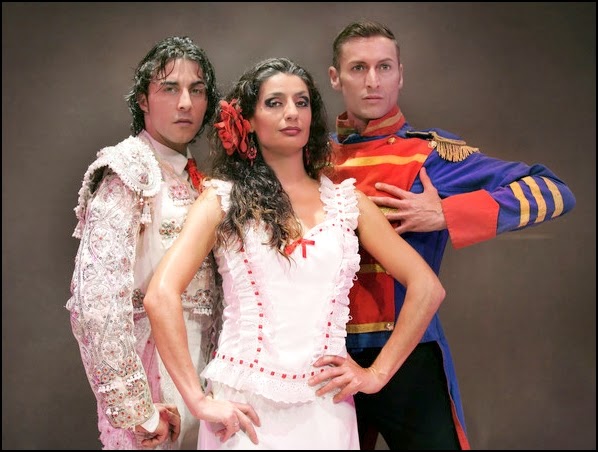 The adaptation of the Bizet’s play made by
Luciano Ruíz, which has already got the praise of more than a million
spectators in Madrid and Barcelona, keeps playing until the end of August 2014
in order to delight the audience with an exhibition of art, sensuality,
folklore and tradition at the space Teatro Fígaro in Madrid. A perfect mixture
between the theatrical plot and the Flamenco musical show in this
internationally celebrated play.

Tickets booking: you can book your tickets online on
the Theatre’s website (), on the website of El Corte Inglés (https://www.elcorteingles.es/entradas/teatros-y-musicales/entradas-carmen-de-bizet-danza-madrid-201400317200400156) or on the website entradas.com (https://www.elcorteingles.es/entradas/teatros-y-musicales/entradas-carmen-de-bizet-danza-madrid-201400317200400156).

Price: single ticket 20€. Group of
more than 10 people are likely to get a special discount (see special
conditions on the Theatre’s website).